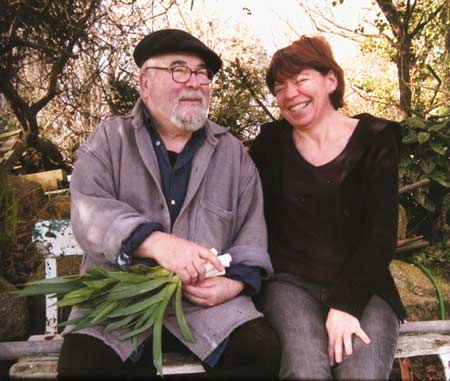 Baz Mehew is a self taught artist, having previously drawn, painted and carved throughout his working life. He developed an interest in art whilst visiting other countries as a clearance diver in the Royal Navy. After an injury he left the services and started doing up old properties, including a farm in Wales. Always interested in food and cooking he subsequently, with a partner, set up a popular delicatessen in Dartmouth. From there they moved to Cornwall in 1988 and established a market garden business, keeping his interest in art alive through running a gallery attached to the premises. Baz and Maureen established and ran a gallery in Penzance for around 10 years, called ‘Dick The Dog’ named after his old bull terrier. The gallery ran art exhibitions and sold a range of crafts and furniture.

Baz’s work stems from an interest in the art of primitive cultures, Inuit, Maori, African, Celtic, etc. This richness of cultural artefacts provides a wealth of material from which to draw inspiration for his stone carving.

The range of work can best be described as an interpretation of primitive images. Gods and goddesses, the Green Man, shaman type animals, hawk heads, fish, spirals, mostly in stone, bone and wood. Occasionally he includes semi precious stones or metals. He has produced small, and sometimes even miniature, pieces, reminiscent of Inuit carvings, tactile and with pleasing proportions.

Maureen Kennedy was born in Northern Ireland and after school she went to America for a year where she worked in residential social work. From there she moved to England where she qualified in social work. After a period with a Local Authority, and a trip to Sri Lanka and India, she worked mainly in the voluntary sector, including organising housing for refugees, tenant participation, and supporting young people in a self build scheme. Moving to Cornwall in 1996 she worked as administrator and fundraiser for Penzance Women’s Aid. Subsequently she met and joined forces with Baz to run the gallery.

Maureen enjoyed art at school and took a number of part time art courses over the years. Since running the gallery she has developed her work for sale. Her subject matter stems from what she observes around her, developing paintings from drawing and sketching.
Home
Course details & prices
About the artists
Photos of the place
About the area
Baz's stonecarving gallery
Maureen's paintings
Contact us
Links
Students comments
Blog
Shopping Cart
Gift Vouchers